Most plant lovers associate saxifrage with spring-flowering cushions. But there is so much more ... And it is precisely this diversity that seduced us to collect some beautiful species, admittedly, sometimes there are so many that it is difficult to choose.

Whether it is silvery rosettes nestled against a sunny wall or pale pink inflorescences that glow in the fresh undergrowth - there is the right saxifrage for every location. Of course, the choice of the right garden space is decisive. The silver-crusted saxi questions with their lime shell indicate that they can hold their own against solar radiation. In contrast, the octopus (Saxifraga cortusifolia) grow in nature on the edge of the forest, with a lot of fallen leaves over winter. They prefer to be in the shade in our tidy gardens so that they don't dry out too much. . They owe their nice German name to the surprisingly late blooming date (end of September / October).

There is a reason why you should first think about a place in the garden before the shopping spree wins ...

This autumn saxifrage from the forest edges of Japan is slowly conquering our gardens too. The Saxifraga, known to us under the name "Oktoberle" or "Herbststeinbrech", love slightly acidic, fresh, humus-rich and nutrient-rich soil. Since early frosts occur in many areas as early as October, the planting site should be chosen in such a way that protection against these "early frosts" (freezing of the flowers) and protection against "late frosts" in spring (freezing of the leaves) is guaranteed. The plants usually survive both types of damage. In late frosts, growth disorders can occur, this is noticed when the plants hardly grow in that year. The plant survives winter frosts very well, as our own experience in our nursery over the past few years is evidence of this. The plants were kept in 30 liter pots without winter protection or other precautionary measures. Our assessment is that the "Oktoberle" stands out with its delicate, green to red colored leaves and that it is characterized by the flowers in autumn.

Botany: Occurrence in Japan, South Sakhalin, South Kuril Islands, Korea, Manchuria, Ussuri and China. Deciduous perennials without runners, long-stalked leaves, round to kidney-shaped, fleshy, green, underside often reddish, 5 to 11 lobed, stem length up to 30 cm. The inflorescence is often an umbel or pyramidal panicle. The flower color is predominantly white, the varieties come in all shades from red to pink and yellow to green with green or reddish stems. The flowering period extends from August to December.

Pests: First and foremost, "black weevils" should be mentioned here; beneficial insects are usually used to control them. In the case of "lice infestation" that like to sit on the flowers, commercially available insecticides can be used. In the case of plant injuries, "mold infestation" can occur, albeit rarely. Suitable fungicides are then sprayed or poured here.

Use: Planting in groups, in the shade as well as in partial shade, is the most effective. You can combine the autumn stone breaker with Gentiana sino ornata as a pre-planting, hosta, heuchera, cyclamen, anemones, anemones, galanthus, anemonopsis as well as not too large ferns and grasses.

It is called "DAI-MONJI-SOO" in Japan, which means something like "large character plant". Shaded places are certainly available everywhere, let's give the character of the "Herbststeinbrecht" a home! 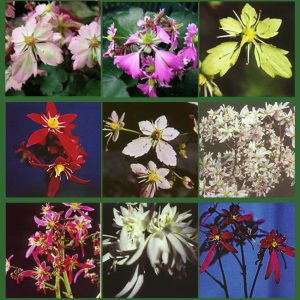 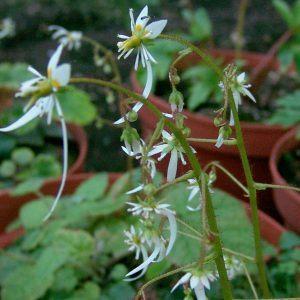